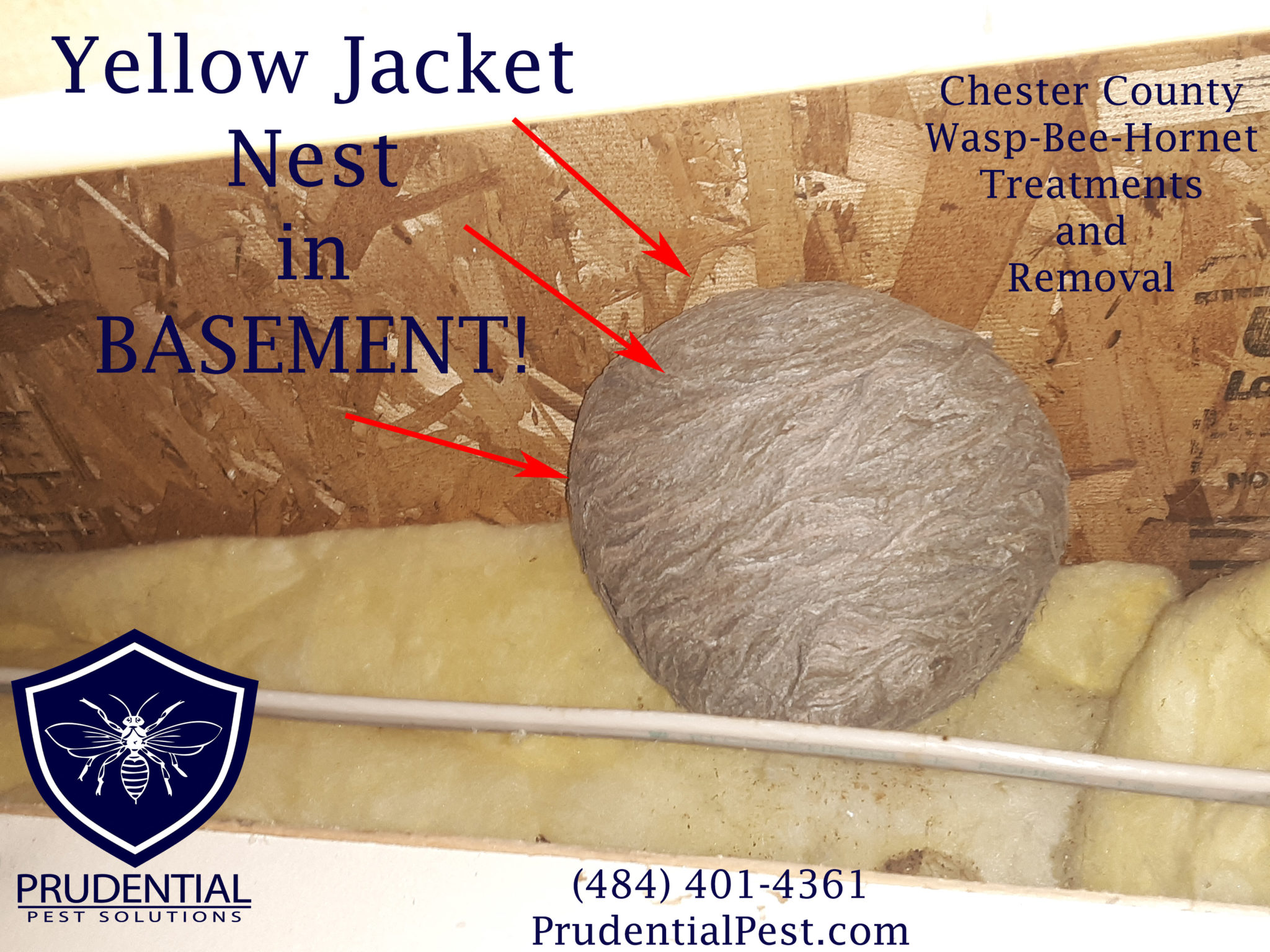 While conducting a simple house project, the client moved some of the insulation along the sill plate and discovered a large yellow jacket nest. The yellow jackets had gained access to the basement by following a cable line from the outside of the home to the inside. Once they discovered the nest, they immediately called in the professionals at Prudential Pest Solutions to treat and remove the nest.

When we arrived at the home, the inspection and evaluation found the nest and where and how the yellow jackets had entered the home. We donned our protective suits and began the treatment process. The treatment process includes treating the nest, removing the nest, sealing up the entrance into the home, and cleaning up the nest and dead yellow jackets.

I use a chemical from BASF called PT PI as my primary treatment product for all stinging insects including yellow jackets, wasps, bees, and hornets. I love PT PI because as an aerosol it permeates the entire nest quickly and kills the insects almost instantly. This quick kill action is EXTREMELY important when you are in close quarters with thousands of stinging insects in a confined space.

During the treatment, the yellow jackets are dead within seconds. We remove the nest and immediately seal up the opening so no foraging yellow jackets come into the space and cause us problems. We then vacuum up the dead yellow jackets using our HEPA filter vacuum.

As a final treatment step, we treat the exterior of the home for general pests such as ants, spiders, and wasps.

This nest was treated and removed in late July in Coatesville Pennsylvania. The nest was in its building stage and if it had been left alone for another few weeks or months, the nest could easily have had thousands of yellow jackets in it.

The homeowners were lucky that they discovered the evidence and the nest while it was still relatively small. Had they accidentally disturbed the nest, the occupants of the home could have been swarmed by these dangerous stinging insects. Remember, unlike honey bees, yellow jackets are EXTREMELY aggressive and can sting repeatedly.

We are EXPERTS at handling, treating, removing, and preventing yellow jacket, hornet, and wasp infestations. We service Berks, Chester, Montgomery, Delaware Counties, and ALL of South Eastern and South Central Pennsylvania.

As a Family and Veteran owned and operated pest control and exterminating company, we pride ourselves on our affordable, professional, and effective pest solutions.