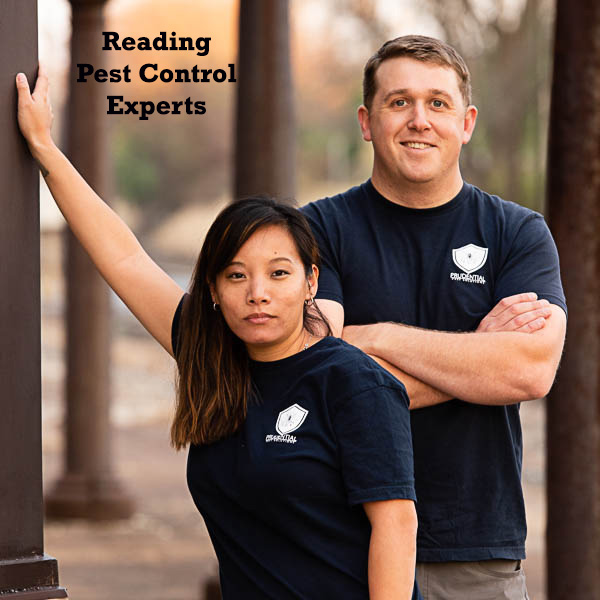 We were called out to a mouse infestation in a home in West Reading PA. The customer had another pest control company out and all they did was place some glue boards in the kitchen and that was it!

After our inspection, we presented to the homeowner with some treatment options but more importantly, we discovered WHERE the mice were getting in!

Our rodent treatment process involves determining where the mice are getting in, performing a treatment, and then providing options to keep the mice out. In this situation we decided that using mouse traps in strategic locations in the house combined with sealing up the mouse entrances was the best way to proceed.

The first step we perform is to eliminate the rodent access to the livable areas of the home. This often includes pulling out the oven and sealing behind it. Ovens are usually operated by one of two methods: gas or electric. When they run the gas line or larger electrical line to the oven, there is often a gap left where mice love to use to get into the kitchen. For this treatment, we pulled out the oven and noticed a large gap where the wall meets the floor.

We remove the mouse droppings

Why remove the droppings?

1) we are removing rodent excrement which can harbor disease so we are making the home cleaner and safer.

2) we are giving ourselves a baseline for future monitoring of rodent activity. We don’t know initially whether the rodent droppings are from a day ago, a week ago, or years ago. When we remove the droppings, we and the homeowner know that any new droppings that appear are from after the initial treatment.

Seal the mouse out!

After we remove the rodent droppings, we apply a sealant to close off the openings from the basement to the kitchen. This will allow the bulk of our treatment to take place in areas other than the livable part of the home. Homeowners are already stressed when they have rodents, but that doesn’t mean they have to constantly see rodents.

By eliminating the access to the kitchen, we are forcing the mice and rodents to remain in the basement and our treatment process can take place out of sight of the homeowner. After the accesses in the kitchen have been sealed, we placed some mouse traps behind the oven and under the sink. These traps will capture any mice that are already in the livable space and hopefully prevent the homeowner from seeing any more mice.

Bring the mouse fight to the basement!

The basement showed the greatest amount of rodent activity with a large amount of dropping found throughout the basement. We set traps along the most common rodent paths we could find. When we inspected where the basement door exits to the outside, we found a inch wide gap along the bottom of the door. This is where the mice were getting into the basement and then into the kitchen.

Seal the outside entry points

After we set the traps in the basement, we went outside to seal up the rodent entrances. The first area we sealed was around the pipe for the gas line coming into the house. Then, we headed to the back of the home and sealed up the gap under the basement bilco door. We also found a seam where the exterior wall meets the siding and we sealed that as well.

This treatment was a success because we found the rodent entrances, implemented a plan of attack using mouse traps, sealed up the inside of the kitchen so the homeowner wouldn’t see any more mice, and because we made the customer feel comfortable in their own home again!

Prudential Pest Solutions is a full service pest control and rodent control company. We are VETERAN and FAMILY owned and operated.

As a Marine Corps Veteran with a degree in biology from Penn State University, I promise you haven’t met a rodent exterminator like me before!