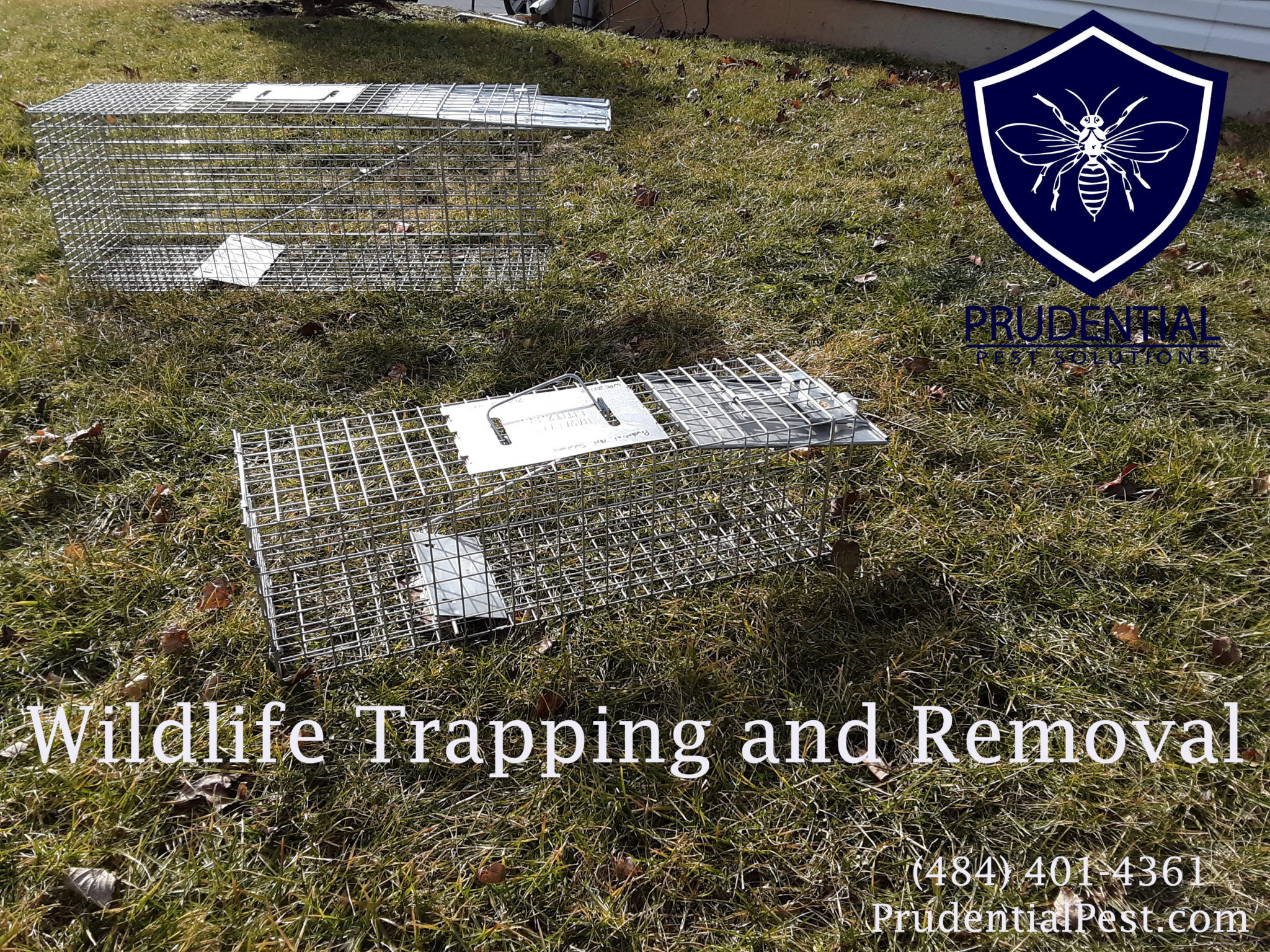 Animal and Wildlife Trapping is a common technique to remove a nuisance invader. Skunks, Raccoons, Squirrels, Groundhogs, and Snakes are common animals that are trapped and removed from properties.

Live trapping is when we capture the animal alive in a box-style trap. The trap is most often a cage trap with a single door that opens to the front.

When the trigger pan is depressed, the door shuts and locks. This traps the animal inside of the trap.

Live traps should be checked DAILY to avoid an animal being trapped for an extended period of time. Daily trap checks also allow you to check the bait and ensure that it is fresh.

The specific species of animal that you are trapping will determine what type of bait to use. Even more specifically than that, the time of year also plays a part in the animal’s taste and food preference.

Baits can be picked up at the local grocery store. sardines, marshmallows, cat food, peanut butter, and apples are great choices of bait for the homeowner. We utilize some of these baits as well as some commercially made baits.

Commercial baits last longer, have more odor to attract, and are specially designed to attract the animal species we want. The baits are in paste form which makes them easy to handle and apply to the trap.

By being specific with your bait choice, you can help to lower your chances of catching a different animal than you intended.

Where to place your trap

Trap placement is critical in having success capturing and removing nuisance wildlife. When the animal has a den on the property, traps should be placed directly at the opening to the den.

For skunks and groundhogs, this will be on the ground. For squirrels and raccoons, the traps should be placed up high where the animals are.

When placed correctly, the chances of capturing a non-target species are diminished

One-Way doors are trap looking devices that are placed directly over an animal entrance. The one-way door is designed so that the animal can leave, but not re-enter the den. When used with a trapping program, one-way doors are extremely effective in evicting wildlife.

Non-Target catches are any capture that is not intended. Since many of the nuisance animals are omnivores, they will eat many different foods. This means that when trapping for skunks, it is very possible to capture a raccoon or cat.

Trap size, trap location, choice of bait, and timing of trapping can all lower the chances of capturing a non-target species.

Lethal trapping can also be an effective method for animal trapping and removal. We discuss some of the ethics involved with this method versus live capture trapping in the Humane Animal Removal section below.

Lethal trapping is using a device to mechanically capture and kill the animal. Most often, the use of a body gripping trap is used. The animal pushes a trigger and the trap snaps and grips onto the animal.

Lethal trapping can and should only be done by a licensed and experienced wildlife control operator.

Where NOT to use Lethal Trapping

There are many circumstances when a lethal trapping program should NOT be used.

This includes situations where:

As the name suggests, lethal traps are a permanent solution to an animal issue. The traps do not know the difference between the animal you are trying to capture and kids, people, pets, or other animals.

An experienced and trained wildlife control operator should be used when a lethal trapping program is desired.

We carry permits through the Pennsylvania Game Commission to legally and professionally handle and remove nuisance wildlife.

What is considered “Humane Animal Removal”? Humane to us means that the animal is not caused any undue harm, stress, or discomfort. This humane approach comes with some tough ethical questions to ask.

On the surface, a lethal trap may seem like a harmful and cruel approach to animal removal. While this may be true for certain applications, on the whole, a lethal setup may be MORE humane than live trapping.

There are no “right” answers when it comes to the ethics of animal capture and trapping. You should definitely be a conversation that you have with your wildlife control professional before trapping begins.

We will ALWAYS communicate the various options that we provide for our wildlife control program. The safety of your family, pets, and the humane treatment of the animal are always our top priority.

We provide animal trapping and removal services for Chester County. We offer many options for animal removal and can explain how we are different than the other wildlife companies.